The Trent 700 is Rolls-Royce’s bestselling engine. The first member of the Trent engine family, it powers the Airbus A330 and last year clocked up it’s 50 millionth flying hour. An opportunity came up to maintain, repair and overhaul (MRO) the engine and Roll-Royce called for proposals from its MRO sites to demonstrate capability. As part of its proposal, Rolls Royce Inchinnan, next to Glasgow Airport, wanted to highlight that it could physically accommodate the engine.

What challenges did Rolls-Royce face?

The engine is larger than any other product that had previously been to the Rolls-Royce Inchinnan site for MRO. Manoeuvring it could be difficult due to the facility layout; it required transportation from the loading bay, around a corner and past a structural column and cranes before work could begin. The project team identified that digital technology could help enhance the quality of its proposal. Using digital scanning and visualisation, they could plan out, and then highlight to key stakeholders how exactly the engine would be accommodated.

How did the AFRC help?

The digital team at the AFRC used novel laser scanning and photogrammetric techniques to create a high-quality 3D visualisation of the facility, incorporating the engine. First, the site was digitally scanned to create a geometrically accurate point cloud of the space. CAD models of the engine and other assets, such as the cranes, were then dropped into the scene. This allowed the project team to simulate manoeuvres in advance, helping identify key measurements and potential areas of difficulty when moving the engines. The second method used was photogrammetry. Here the AFRC’s digital team took 70 – 100 photographs of key areas of the site. Using specialist software, these were processed into photorealistic 3D models, which were scaled using measurements taken from the point cloud. Combining both methods is effective because point cloud data is highly accurate but not photorealistic, while photogrammetric models are visually appealing but lack scale. The final 3D visualisation was incorporated into a high-quality video. This communicated to key Rolls-Royce stakeholders what the site would look like with the engine in place.

The Rolls-Royce Inchinnan site secured the contract to perform MRO on the Trent 700, which is a significant boost for the local area. Creating a visualisation of the factory helped the project team demonstrate that the factory could cope with large civil engines, dispelling doubts previously expressed about the facility layout. Several of the clips shown in the video raised valid, previously uncovered, points, which also significantly enhanced the quality of the Inchinnan project team’s proposal. 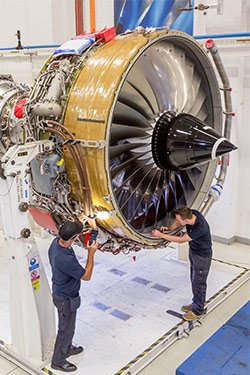 Working with AFRC digital team was a really positive experience and a key part of our success. The project output helped us sell our vision and, crucially, the 3D visualisation proved that the Inchinnan facility could accommodate the engine.